Endpaper: The Paperblanks Blog
Home Inspiring Creativity The Most Googled Artists of 2020 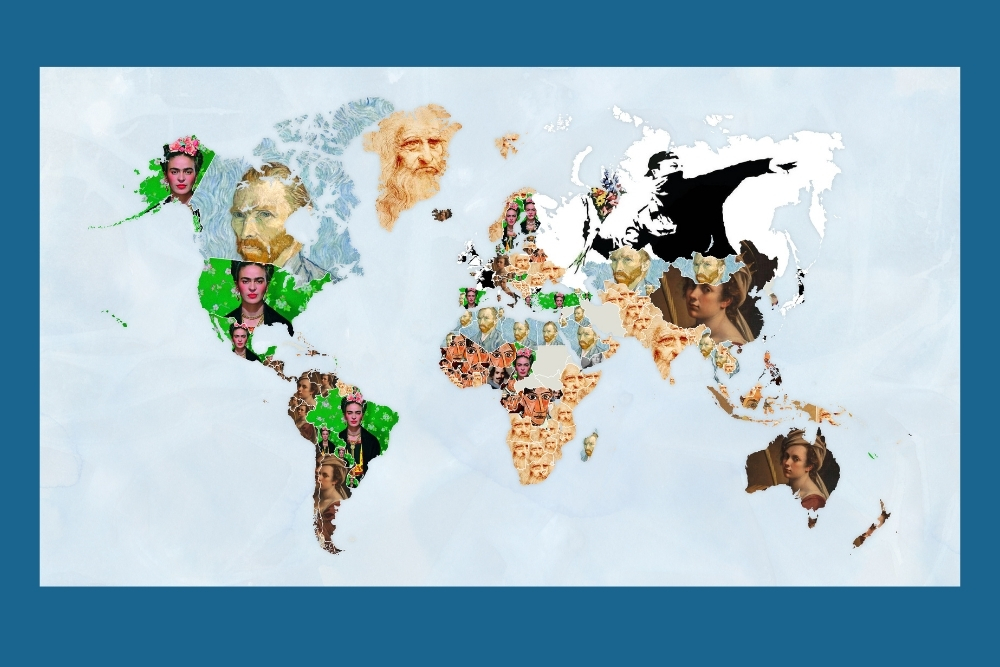 Recently, the team at Ken Bromley Art Supplies in the UK shared with us some interesting research they conducted earlier this year. At Paperblanks we are passionate about art and maps, so when we learned that they had created a series of maps revealing the most Googled artist in every country in the world, we were immediately hooked! It was also a pleasant surprise to find a few of the artists who have graced our covers amongst the top seven.

Ken Bromley Art Supplies is a family-run business located in Bolton, UK. When lockdowns began last year, many people were unable to visit a museum or art gallery but still longed to be inspired by art, so they turned to the internet to virtually enjoy the work of their favourite artists. The team at Ken Bromley thought it would be interesting to find out which artists have been Googled the most during the pandemic. “I am fascinated by what people Google and what it says about us as a society,” explains Gareth Evans over email. “We knew the research was going to uncover something interesting and this excited us to go ahead with it. The fact that most of the winning artists are no longer living and only two females won was really interesting to me.”

After painstaking research using Google search data to reveal the artist searched most in each country, the design team created a unique map to show the world’s most popular artists at a glance as well as a breakdown of the winners on each continent.

Here is what they found

“The most rewarding part of creating the maps was discovering who won in certain countries,” says Gareth. “We sometimes had a hunch on who might win but ultimately we were really surprised that only 13 different artists actually won around the world. We thought it was great that homegrown Banksy won in the UK, and also that feminist Mexican artist Frida Kahlo won in the USA. Once the data was visualised in map form, we thought the results in Africa were really intriguing to look at, in that Van Gogh dominates the North, Picasso the West, and Leonardo da Vinci in the South and East.”

At Paperblanks, we were pleasantly surprised to learn that some of the artists who currently adorn our covers, like Da Vinci, or who have previously been featured, like Frida and Van Gogh, made the top list, and were excited to see some of our other favourite artists on the list. What about you? Who are the artists whose work you have been virtually enjoying lately? Let us know in the comments section!

*Please note: Not all countries had enough data to be featured. Only the countries with sufficient data to analyze were included.

Which artists did you look up the most last year? Who are you hoping to learn more about in 2021?

Paperblanks Team - April 18, 2013 4
Click to Enlarge (Via Travel 365) Looks like we have a new contender for the most beautiful bookstore in the world! The above photo depicts the...