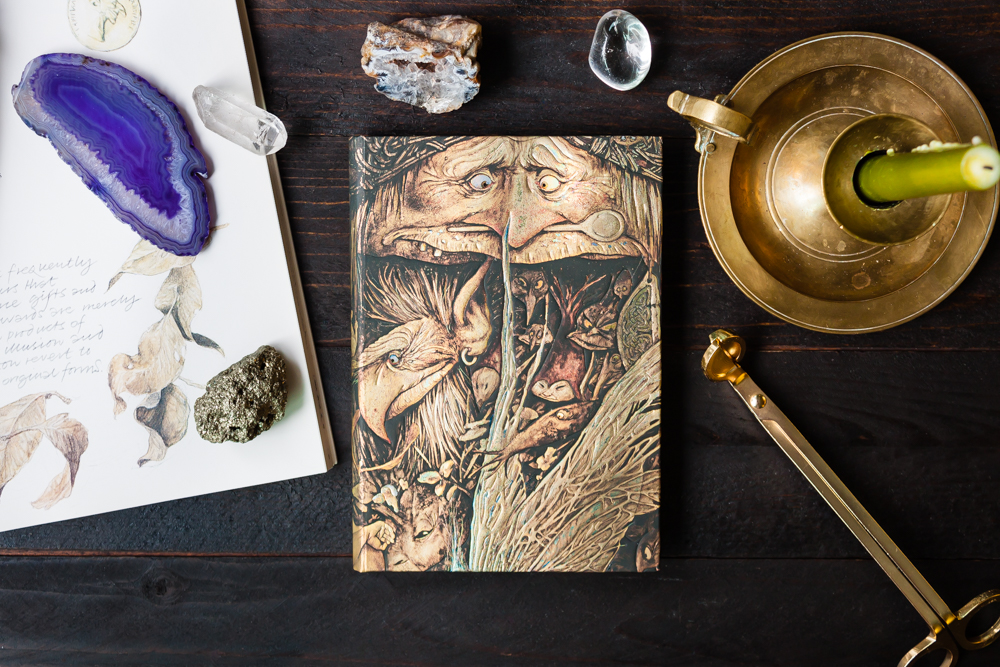 This week marks the anniversary of the publication of Brian Froud’s book World of Faerie, a collection of fantasy art depicting whimsical creatures. The long-awaited sequel to his international bestsellers Faeries and Good Faeries/Bad Faeries, Froud’s World of Faerie offers us a startling new vision of the magical realm, enhanced by the author’s own words about his experiences and insights.

Our Mischievous Creatures cover design reproduces a scene from this book, first published in 2007. It’s taken from an illustration accompanying the poem “The Land,” which provides the perfect companion to Froud’s distinctive style of art, telling the story of the elements of the earth taking on a life of their own.

Drawing inspiration from the gnarled shrubbery of England’s windswept moorlands, Froud is best known for being the genius behind Jim Henson’s film The Dark Crystal, followed by Labyrinth, and for illustrating bestsellers such as Lady Cottington’s Pressed Fairy Book and the artbook Faeries, working closely with Alan Lee.

Froud started his artistic career almost by accident. It hadn’t occurred to him to follow that path until an art teacher noticed his drawing talent and suggested art school, where Froud pursued painting for a while and later moved to graphic design. But it was not until he discovered Arthur Rackham – a turn-of-the-century artist who painted fairy tales – that Froud discovered his true passion. He was inspired by the richness of the illustration and the level of detail that went into the nostalgic works.

Today a highly celebrated English fantasy illustrator, Froud lives and works in Devon with his wife, Wendy, who is also a fantasy artist. For over 35 years, Froud has been regarded as the preeminent faerie artist in the world and an authority on faeries and faerie lore.

With the 2019 release of the Netflix series The Dark Crystal: Age of Resistance, we are seeing a resurgence of our childhood memories and we are ready to write them down in our Mischievous Creatures journal!

What is your favourite Brian Froud book or movie?

Paperblanks Team - March 8, 2011 1
It's International Women's Day today (not to mention Mardi Gras and Carnival!), and in recognition of this we’ve decided to spotlight our Laurel...