One of the best-known English Romantic poets, John Keats (1795–1821) was a major figure in the scene despite having his work in publication for only four years prior to his death. Initially interested in the medical fields, in 1814 Keats sacrificed these ambitions and devoted himself to art. He spent the remaining years of his life surrounding himself with celebrated artists like Leigh Hunt, who, in May 1816, helped Keats publish his first poem in a magazine.

Just one year after this first publication, a collection of Keats’ poetry and sonnets was compiled and printed in the volume “Poems.” Though this collection was poorly received by critics, Keats could not be dissuaded from his true calling and continued to work on his art. Through financial failures and family turmoil, Keats continued to write and on September 19, 1819 he found himself especially inspired by the crisp autumn day. 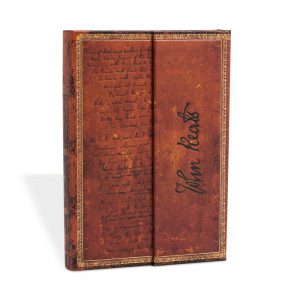 “To Autumn,” the piece of writing that we have reproduced for our cover honouring John Keats, has become one of the most highly regarded pieces of English literature and yet marks the end of Keats’ brief poetic career. It was after writing this poem that his financial burdens overwhelmed his creative ambitions, and he moved on in order to pursue more lucrative endeavours.

Reading the poem today, with the added weight of knowing it was his last, gives greater significance to Keats’ musings on three aspects of the noble season: its fruitfulness, its labour and its ultimate decline. Of all Keats’ poems, “To Autumn” most closely describes a paradise as realised on earth while also focusing on archetypal symbols connected with the fall season: growth, maturation and finally, the approach of death.

Just one year after writing this poem Keats passed away in Rome, leaving the world to wonder what more could have come from his creative mind had he been able to return to his craft. Even without a large body of work Keats remains one of the most influential English poets of all time. In particular, his odes such as “To Autumn” continue to set the standard for works of their nature. His pieces are filled with a mysterious, uplifting sense of beauty, along with a deep knowledge of the sorrow of the human condition. Nowhere does poetic immortality find a purer expression than in the outpourings of Keats’ gentle soul.

Click here to find Keats, To Autumn in a store near you

Robyn @ Paperblanks - November 18, 2014 0
Along with introducing a wide variety of new cover art, we always love to bring back our favourite colours in new formats when we...