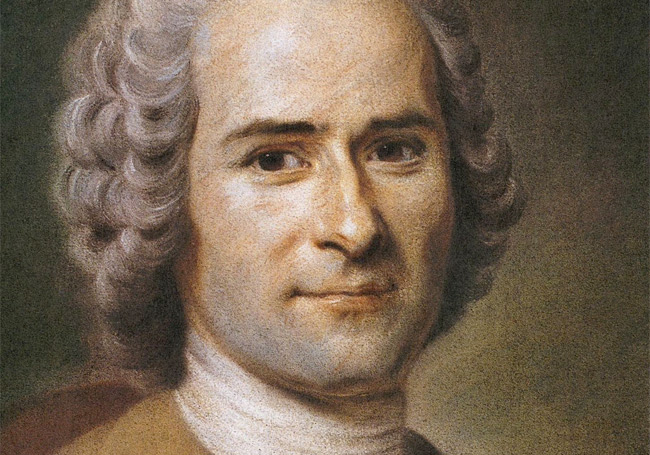 Today marks the 300th birthday of one of history’s great revolutionary thinkers – a man who changed the faces of philosophy, musical composition and literature (not to mention the inventor of the autobiographical form) – Jean-Jacques Rousseau (1712-1778).

Rousseau’s effective articulations about freedom and democracy made him one of the most important architects of the eighteenth-century Enlightenment movement. His enduring expressions paved the way for Romantic sentiment and his vast and humane imagination helped to forever change the way philosophers view humanity and society. In his famed treatise, The Social Contract, he wrote that “Man is born free, and everywhere in chains.” He felt that society was detrimental to humans as it moved us from a healthy respect for sentience and reliance on compassion to what he called amour-propre or pride and fear.

An Original Manuscript Page by Rousseau; Recreated on a Journal Cover

Pictured on the cover of our Rousseau, Julie blank journal is a manuscript excerpt of Rousseau’s bestselling novel, Julie, ou la nouvelle Héloïse. The 1761 book was not only one of the biggest best-sellers of its century but its popularity lead to Rousseau’s arguable status as the world’s first celebrity author.

The revered novel’s story, as described by UPNE for their 1997 English translation of the book, “follows the fates and smoldering passions of Julie d’Etange and St. Preux, a one-time lover who re-enters Julie’s life at the invitation of her unsuspecting husband, M. de Wolmar.”

Sketchbook Saturday: Daily Rituals of the Most Creative Minds

Robyn @ Paperblanks - April 25, 2015 0
Mason Currey's 2013 book Daily Rituals: How Artists Work offers an in-depth, personal look at the habits of some of history's brightest and most...