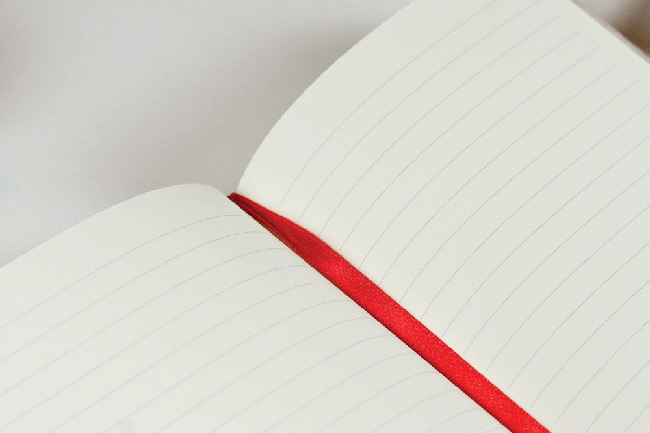 As we discussed in a previous article on Factors to Consider When Buying a Writing Journal, the quality of a notebook’s paper can be fairly important. The nicer the paper the more pleasant your writing experience will be. Anyone whose written in both a generic drug-store brand notebook and something with a higher-grade paper will be able to tell you the same – the quality of the paper makes a difference!

So we’ve decided to compile a list to help you spot the good stuff from the bad. See below for four signs your writing journal or notebook has high-quality paper.

This one’s easy: if the paper has a smooth finish not only will it look nicer but it will be pleasant to touch. What you might want to avoid is paper with too much pulp. Too much pulp will lead to short fibers that can get picked up by your pen’s point. This is especially annoying if you’re using a fountain pen. (All of those little fibers will accumulate into annoying fuzzballs that will have to be removed from the pen.)

Feathering is when ink smears on the page, especially at the edges of your writing. (See the image on the right for an example.) This usually results from low grade or thin paper that absorbs too much of the ink. Higher grade paper, however, will usually prevent too much absorption and ensure ink stays on the surface.

Also related to a paper’s thinness is the degree to which ink bleeds through to the other side of the page (or “Show-Through”). This has to do with a papers’ “opacity” (which is “the property of paper which obstructs the passage of light and show-through of printing.“) Generally, the lower a papers’ opacity is the more the ink will bleed through the other side of the page. In extreme cases the ink could soak into the next few sheets underneath. Anyone who’s experienced this first-hand knows – it doesn’t make for a very pleasant writing experience! Nice quality paper will always have high opacity and little to no show-through.

Finally, there’s the speed to which pen ink will dry on the page. This can sometimes be related to the choice in ink, but generally paper can affect the drying time. If ink drys too slow: your writing could be easily rubbed off or smeared before it sets into the page. (This is especially problematic for lefties, whose hands tend to immediately rub up against their fresh writing!) Generally, you want the ink to dry fairly fast!

Have We Missed Anything?

If we’ve missed anything important feel free to tell us in the comments section below!

To learn more about the paper quality of a Paperblanks notebook, watch this video on the subject.

About Paperblanks: We have been producing superb writing journals for nearly twenty years. We are book people, and we believe that the written word matters and that our blank books have a critical role to play in the art and continued practice of writing itself. For more about Paperblanks, go to our website at paperblanks.com.

Reintroducing Mirror Vine – The Winner of Our #Paperblanks25 Contest