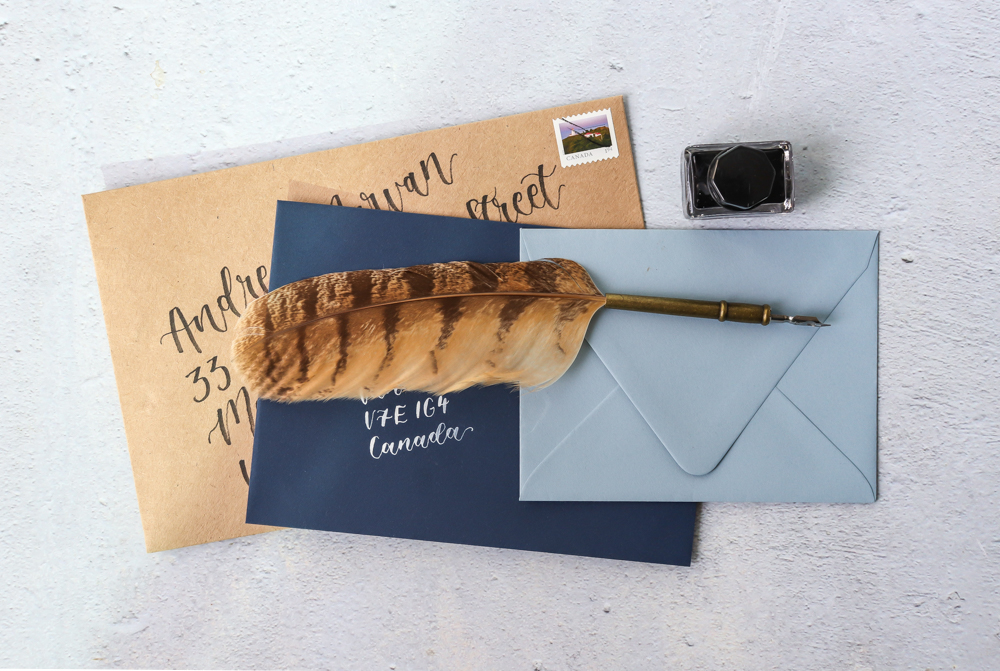 February is International Correspondence Writing Month (InCoWriMo) and to continue the conversation we started a couple of weeks ago about sending more snail mail, today we are chatting with Danielle Hayden, a Seattle-based freelance creative writer.

Danielle collaborated with us a few years ago in a blogpost where she shared her writing journey and the benefits of keeping a journal. This time Danielle brings us a very exciting project she launched last November: 3pistolary, a passion project to promote the art of writing letters and the importance of fostering relationships through letters. All she asks is for participants to commit to writing three letters to three people in one year.

Where did your love of writing letters come from?

I’ve been writing for some time to two very good friends of mine who I don’t see very frequently, and they both also like to write letters. With one of them it’s only a couple of times a year but the other one we try to write to each other at least once a month. My first pen pal was when I was 11 years old, and she was an exchange student from Mali. She came to stay with my family for a summer and then when she went back to Mali, we sent letters for a little while.

What’s your favourite thing to use when you are writing letters?

I love to buy stamps that feature different artists or flowers. I also have a stash of stamps that say Thank You on them for when I send a thank-you card. I have a fountain pen that I use sometimes. And I have a big box that I can’t even close anymore because it’s overflowing with stationery that I plan to send. I like to buy pretty stationery.

Why do you think it’s important to continue the habit of handwriting in this digital age?

I’ve read about cognitive benefits when we write with our hands and also on a more artistic level, I love looking at lettering as an art form and not just as a form of communication. I think it’s the fusion of two things that I really love: words and art. And I love putting that together. Just that intimate act of putting pen to paper instead of typing and deleting — there’s a craftmanship to it.

Also, handwriting can tell us a lot about people’s personality or what they’re going through, or if they’re in a rush… those little clues that you don’t get with typing.

What’s the most meaningful letter you have ever received?

Probably one from my husband. This was ten years ago at least. He hates writing and he wrote me a four-page letter once for my birthday and it’s my favorite birthday present I’ve ever gotten because I know how much it meant for him to write that letter. So that was probably my favorite letter. I still have it in a box. I have every letter I’ve ever gotten saved in a box. I don’t keep all my cards, but I always save letters. Also, one from my brother. When he graduated from university he gave me, my dad, and my mom each a letter. He was 23 and I was 16 and at the bottom of the letter it said “I love you” and that was the first time he said it. I had been wanting to hear that from him for my whole life because he normally doesn’t share his emotions.

What about the most meaningful letter you’ve ever sent?

It’s hard to say but maybe the one I sent to my father when I was in high school. I just told him that I loved him and also thanked him for being so supporting of my dreams and encouraging me. He and I have always been very close so it wasn’t like I couldn’t say it vocally, but I just wanted to write him a letter. He’s a tough guy who doesn’t cry a lot, but the letter made him cry and that was very sweet.

Tell us about the inspiration behind 3pistolary.

I launched it in November 2021, but I bought the domain name for the website in November 2020. It was just a combination of things: in 2018 I had made a list of people I wanted to write to, who I had important things to say to. I was writing these letters but not very often and when I did write them, they gave me a sense of peace because I had expressed something that needed to be said. And then I started thinking about how I could inspire other people to do it. I was also thinking about the pandemic and how technology has been instrumental in navigating the pandemic but also how it’s nice to get back to more traditional ways of communicating. So, I was thinking about how I can keep in touch with people during the pandemic. Another thing that inspired this project was when my stepfather died in 2018 and I had been meaning to write him a letter, but I never got to it as he died more quickly than we thought after his cancer diagnosis. I kept putting it off, thinking, “I’m going to write him this letter,” and then he passed away. I already had been writing letters, but I didn’t send his and that made me think, I’m not going to let that happen again. I knew I had to keep going through my list of people I wanted to write letters to. It was really all those factors that contributed to this project.

Why do you think it was important to you and to others to write letters during the pandemic?

I think it just can be so heartfelt to write a letter because it’s so much more personal and intimate. Again, I’m grateful for technology, especially during the pandemic, and it’s been very helpful. But because there has been so much more reliance on technology it was nice to turn away from Zoom and email for a minute and just get back to pen and paper.

One didn’t seem like enough, obviously two is better, but three just sounded right and then it fits with the name. I love the word epistolary and the 3 looks kind of like the E just backwards, so it all fit with three. And I didn’t want to impose a lot of rules, or any rules, really. You can type it or handwrite it, no rules there. But the reason why I said within a year is because if I didn’t, I thought people would keep putting it off so I tried to give a soft deadline. I’m not hovering over anyone’s shoulder. I didn’t want people to feel obligated. In fact, there is no signup, there’s no newsletter or anything like that breathing down someone’s neck, but I set a year so people would have kind of a deadline in mind, so they actually try to do it.

Have you written yours yet?

I’m still crossing people off my list from years ago, but I haven’t picked three just for this project. I’ve written other letters that were on my original list.

Thank you Danielle for sharing your thoughts with us!

If you want to learn more about 3pistolary and participate in the project, please visit their website and Twitter feed.

Robyn @ Paperblanks - August 25, 2015 7
Sometimes at the Endpaper Blog we get the unique opportunity to offer a platform to creative journallers from around the world. Today, we are...