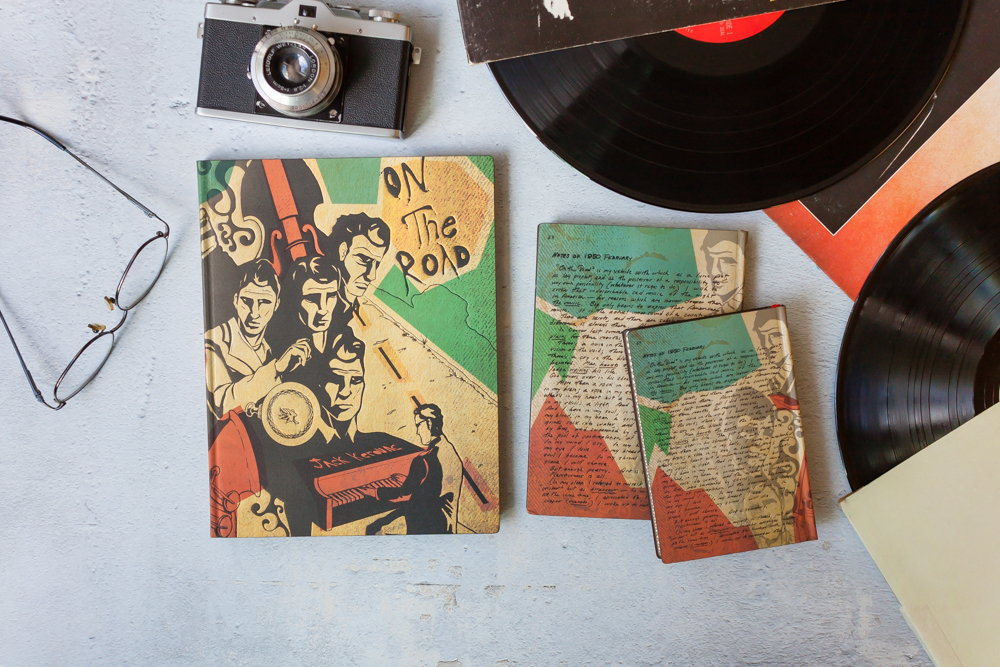 “I wish to evoke that indescribably sad music of the night in America… It is the actual inner sound of a country.” – Jack Kerouac

American novelist and poet Jack Kerouac (1922–1969) stands out as the voice of the Beat Generation. With a writing method heavily influenced by the era’s explosion of jazz music, his “spontaneous prose” came to represent a new era of popular writing.

Kerouac’s On the Road is considered the defining work of the Beats, with his real-life travels represented against a backdrop of jazz and poetry. The novel, published in 1957, was formed in a series of spiral-bound notebooks Kerouac took with him on his journey. In the notebook entry on our back cover, Kerouac writes poetically about the inner music, beat and rhythm that exists within us all.

Digital illustrator Dominic (Nic) Ferrari created four unique designs inspired by the characters of On the Road, including the one we featured on our front cover. Focusing on the music and jazz depicted in the novel, it is the perfect way to highlight Kerouac’s own writing on the back.

As we near what would have been Kerouac’s 100th birthday, we are honoured to bring his great American novel to our Paperblanks collection.

Shelley’s “The Sensitive Plant” is Brought to Life in Our Poetry...

Robyn @ Paperblanks - February 20, 2018 0
Our new Poetry in Bloom design reproduces the binding of The Sensitive Plant and Early Poems, a collection of poems by Percy Bysshe Shelley....