In From the Archives, we are taking a look through our back catalogue to showcase covers no longer offered in our current season. From our early publishing roots to designs recently retired, these are the untold stories behind some of the art and handwritten manuscripts we have been honoured to work with. 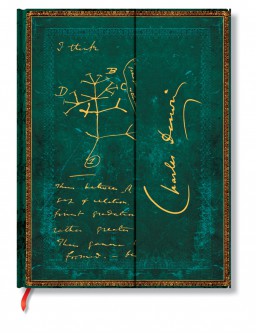 Charles Darwin (1809–1882), arguably one of the most influential thinkers of all time, studied botany, geology and entomology from an early age. When he joined the natural history group “Plinian Society” in college, he befriended botany professor John Stevens Henslow. The rest, as they say, is history. Darwin immediately found his calling and devoted his life to scientific research.

Darwin’s eventual name-making work, much of it conducted on a five-year voyage on the HMS Beagle along the South American coast, inspired him to write his most famous book, On the Origin of Species. While charting the South American coast, he was able to study volcanic rock cliffs, seashells and large mammal fossils. This proved to be life-changing for a young Darwin and led him to draw his first sketch of the evolutionary tree.

It is his “spindly drawing” of the Tree of Life, sketched in a July 1837 notebook and published in 1859, that has been recreated on this Embellished Manuscripts cover. The sketches and formulas seen here demonstrate Darwin’s first glimpse into our essential interconnections. He was the first person to draw such a tree that showed all species on Earth as being related. Where Darwin saw evolutionary branches as discrete, today’s biologists see cross-breeding that would turn the tree into an impenetrable tangle. And so, though his tree has since been proved to be an oversimplification, Darwin’s Tree of Life lives on in the work of today’s leading genetic scientists.

Charles Darwin forever changed the way we perceive both nature and ourselves. He popularised the term “evolution” and gave strong evidence that all species have developed over time from common ancestors. Today scientists think in terms of “supertrees” and see millions of evolutionary vines in addition to the branches, but Darwin’s drawing remains the palimpsest. His award-winning theories inspired Social Darwinism and formed the basis for modern scientific thought.

Despite having ten children and experiencing severe stomach ailments that were a result of his tireless work habits, Darwin continued to follow his passions and wrote many influential books until his death in 1882.

Your Paperblanks Journey Could Win You a Fun Getaway!

Robyn @ Paperblanks - July 6, 2017 2
It's giveaway time here at Paperblanks! After such a positive response to our #PackYourPaperblanks contest last summer, we've brought it back with a new...